You Won't be Alone

In a small nineteenth-century Macedonian village (not that you would know from watching the movie) a mother looks at her child's crib and finds a withered, burnt hag leering over her baby.

She haggles and deals with the apparition - a wolf-eateress, a witch she recognizes as Old Maid Maria (played by Anamaria Marinca), and manages to convince the intruder to leave her child be for sixteen years.
Maria agrees, but as a parting gift she takes the baby's tongue.

As soon as the hag leaves the house, the mother takes the child to a cave and raises her there. For sixteen years Nevena (played by Leontina Bainović as a teen) only sees the outside world through two tiny flues on the top of her cavern, and her only contact with humanity are her mother's sporadic visits.
It's all for nothing, though: Old Maid Maria, who is also a shape shifter, does come for her in the end.

After a bloody ritual Maria turns Nevena into a witch, giving her black talons and the ability to change forms. Her intention is to take her under her wing, but the teen proves to be too stubborn, and Maria too ill-suited to teaching. Annoyed, she sets Nevena free near a town, to learn what she trusts will be painful lessons. 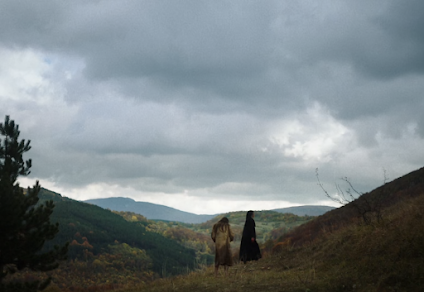 Nevena stumbles around and discovers the hard way she can only take someone's shape by devouring them, stuffing their innards into the same wound Maria inflicted on her to turn her into a witch. She will take on several lives this way, living them out herself as she tries to sate her fascination with mankind.

And all the time Old Maid Maria watches balefully from afar , full of scorn at this upstart that aspires to a normal life that was denied to her.

You Won't be Alone is a folk tale that's sometimes grim and often beautiful, about an outsider trying to figure out humankind. Nevena is almost feral at the outset, and never does speak even after she grows back a tongue, but she has a lust for life and experience that's very endearing.
Because she takes the places of adults, she's thrown into the deep end of life and can never really fully enmesh herself into the lives of the villagers that surround her. So she continues trying; taking lives in more senses than one.

Rural life looks unchanged from the middle ages -brutish and short- and Nevena never really got to learn the finer points of morality, so there's no shortage of ugly and violent incidents; She is a witch, after all, and the movie does not shy away from getting raw and bloody. But it's really not a horror film, even despite having a honest-to-goodness Freddy-Krueger-look-a-like villain in Old Maid Maria. Don't expect any scares here, but the gore is used in memorable ways. I especially liked how old meatball-face Maria off-handedly discards the remains of her former skin as a disgusting trail of shambles as she walks on.

The various actors that play Nevena in her different incarnations (including Noomi Rapace) collectively manage to portray a compelling character, and do a good job in getting you invested in her journey to rejoin humanity. Old Maid Maria gets a back story too, and is a good foil for the protagonist - kind of relatable but still an absolute dick.
Director Goran Stolevski chose to go with a squared aspect ratio; The cinematography is excellent, he and his DP compose very dynamic shots that maximize the amount of countryside and natural lighting captured whenever possible.

It's a very contemplative, sometimes slow movie. We're privy to Nevena's thoughts, which she expresses in a poetic muddle, often while meditatively walking through staggeringly pretty Serbian natural and rural landscapes.
Yes, the Terence Malik is very strong in this one.

The narration is fine; it starts a bit annoying, but that's justified as the girl is just starting out; as she gets more experience, her musings become more articulate and better composed. "Fires... Fires... What soft fires." she says of children playing. I like it. 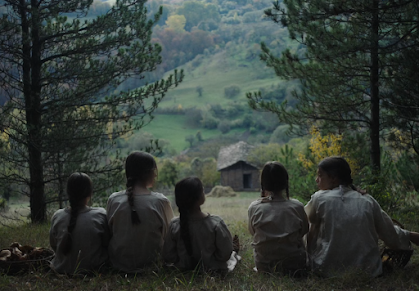 She'll often matter-of-factly describe horrible things about the people around her, the ways they hurt each other or the suffering they endure. But she always ends them with the same refrain: "And still... and still..."
Which could serve as the heartfelt thesis for this beautiful movie.
Posted by R C at 9:38 PM
Email ThisBlogThis!Share to TwitterShare to FacebookShare to Pinterest